The recombinant production of enzymes at high titers using various hosts, such as filamentous fungi, is an important aspect affecting costs for many commercial applications today, including pharmaceuticals, food processing, biofuels, and detergents. Aspergillus niger is a fungus and one of the most common species of the genus Aspergillus. Aspergillus niger is cultured for the industrial production of many substances. Various strains of A. niger are used in the industrial preparation of citric acid (E330) and gluconic acid (E574). A. niger fermentation is "generally recognized as safe" (GRAS) by the United States Food and Drug Administration under the Federal Food, Drug, and Cosmetic Act. A. niger is also considered as a potential alternative source of natural food grade pigments. Many useful enzymes are produced using industrial fermentation of A. niger. Another use for A. niger within the biotechnology industry is in the production of magnetic isotope-containing variants of biological macromolecules for NMR analysis. Aspergillus niger is also cultured for the extraction of the enzyme, glucose oxidase (P13006), used in the design of glucose biosensors, due to its high affinity for β-D-glucose.

Red/ET Recombination permits the engineering of DNA in Aspergillus niger using homologous recombination mediated by phage protein pairs, either RecE/RecT or Reda/Redb. The central step in Red/ET recombination is the crossover step between a targeting construct containing homology arms and the target which can be a gene locus on the Aspergillus niger chromosome by designing a homologous fusion fragment of the target gene, it is cloned into a suicide vector, and the suicide vector is transformed into the target bacterium. An insertion mutant is selected by antibiotic screening. Under the second round of reverse selection pressure, only the mutation that contain second homologous recombination and the loss of the suicide plasmid can survive. By PCR screening and sequencing, we can obtain the mutant of the strain.

CRISPR technology, which derived from the immune system present in bacteria and archaea, is an efficient genome-scale editing tool that has revolutionized conventional genetic engineering methods and unprecedentedly facilitated strain engineering. It enables fast and reliable genetic manipulation in Aspergillus niger. Two components are requested to work: a guide RNA (gRNA), e.g. under an RNA polymerase III promoter, and the nuclear localization tag fused DNA endonuclease, with Cas9 being the most commonly used.

When Cas9 protein and gRNA are expressed in bacteria cells, Cas9 introduces DSBs that must be repaired by the cells via non-homologous end joining (NHEJ) or homologous recombination (HR). By supplying a DNA repair template for use in HR, various DNA modifications can be obtained. 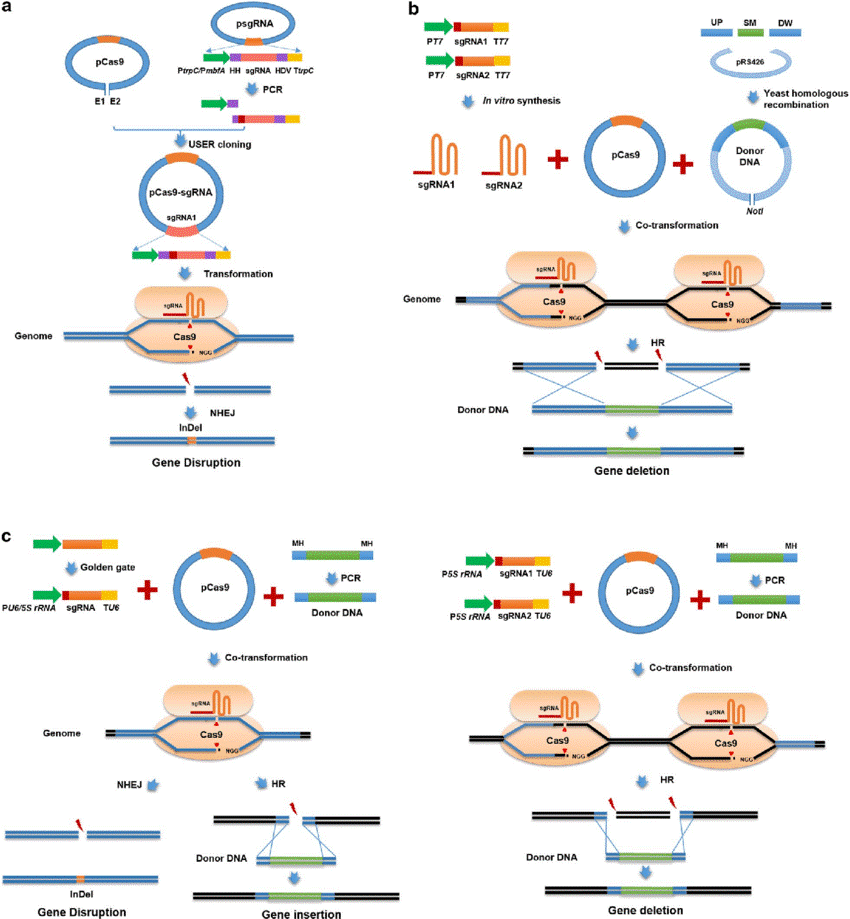 Aspergillus niger and other filamentous fungi are widely used in industry, efficient genetic engineering methods of these hosts have been developed. New methods greatly reduce the effort required to engineer the A. niger genome and overcomes low Cas9 transformations efficiency by eliminating the need for extensive screening. It is expected that new methods will impact industrial biotechnology, such as the development of new strains for the secretion of heterologous enzymes and the discovery and optimization of metabolic pathways.