Flexibacter cells are flexible rods or filaments, 0.5x5-100 microns in size. Its cells can move in a sliding manner. Flexibacter is a gram-negative bacteria. Due to the presence of carotenoid pigments, the cell mass is pink, orange or yellow. 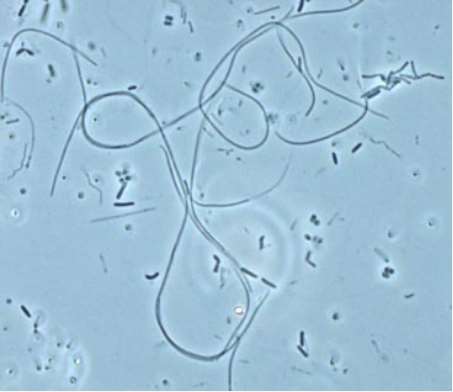 Flexibacter performs organic nutrition through usually respiratory metabolism and utilizes molecular oxygen as the final electron acceptor. But there is one species that has both the ability of respiratory metabolism and the ability of fermentative metabolism. Certain polymers such as agar, alginic acid, cellulose and chitin cannot be utilized. Flexibacter are usually strictly aerobic bacteria.

The cells of Flexibacter flexilis are flexible rods or filaments, 0.5x 10--50 microns in size. It can use tyrosine or tryptone as the sole nitrogen source, but cannot use glutamate or nitrate as the sole nitrogen source. Flexibacter flexilis does not produce acid from litmus milk, nor does it coagulate. Arginine, isoleucine, leucine, methionine, thiamine, tryptophan and valine are essential growth hormones. The cell population was orange, and the extract in hexane had maximum light absorption at 471 microns. The carotenoid humic acid has been detected. Flexibacter flexilis are strictly aerobic bacteria. The optimum temperature is about 20°-25°C, and the optimum pH is about 7.

The cells of Flexibacter aggregans are flexible rods or filaments, 0.5 microns wide and 100 microns long. Tyrosine, tryptone, glutamate or (for some strains) nitrate can be used as the sole nitrogen source. Through the litmus milk test, the bacteria cannot produce acid, and some strains can coagulate or reduce litmus milk.

Flexibacter aggregans do not require the addition of auxin during culture. The cell population is yellow, and the hexane extract has a maximum absorption of light at 450 nm. Bacterial cells have carotenoid zeaxanthin.

Flexibacter aggregans are strictly aerobic bacteria, and the optimum temperature is about 20°-25°C. The optimum pH is about 7. The growth process requires seawater.

The cells of Flexibacter giganteus are flexible rods or filaments, 0.5μm wide and 50 μm long. The bacteria can use tyrosine or tryptone as the sole nitrogen source, but not glutamate or nitrate as the sole nitrogen source. Flexibacter giganteus can produce acid from litmus milk, and most strains do not coagulate and reduce it. A crystalline suspension of dihydroxyphenylalanine inhibits growth. Isoleucine, leucine, methionine, proline, thiamine and valine are essential growth factors required by all strains. Some strains require glutamate. The cell population of this bacterium is pink. The hexane extract absorbs light the most at 478 microns. Cells have been detected to contain a carotenoid. Flexibacter giganteus is a strictly aerobic bacteria. The optimum temperature is about 20°-25°C. The optimum pH is about 7.

The bacteria can utilize tyrosine, tryptone or glutamate as the sole nitrogen source. Some strains can produce acid through litmus milk and solidify. And the bacteria can often digest the curd and reduce the litmus. During the cultivation process, there is no need to add organic growth factors.

The bacterial cell aggregates are orange, and the hexane extract absorbs light the most at 471 microns. The carotenoid humaxanthin is contained in the cells.

Flexibacter tractuosua is a strictly aerobic bacteria. The optimum temperature is around 20°- 25°C.The optimum pH is about 7. The bacteria can grow in both freshwater and seawater with twice the ionic strength.

The cells of Flexibacter succinicans are single rods with rounded ends, 0.6x5 microns in size. Longer cells appear in older cultures, and globoids can also appear. During respiratory metabolism, molecular oxygen is used as the final electron acceptor. The bacteria can also undergo fermentative metabolism. In this process, glucose is fermented into acetic acid, formic acid and succinic acid.

Nutrient broth and other complex nitrogenous compounds can sustain aerobic growth, but anaerobic growth must have a suitable carbohydrate. The bacteria cannot hydrolyze agar and cellulose. All tested strains fermentatively metabolize galactose, glucose, lactose, maltose and starch; some strains can fermentatively metabolize arabinose, cellobiose and sucrose. All strains could not metabolize fructose, glycerol, lactate, mannitol, raffinose, sorbose and xylose by fermentation. During the cultivation process, it is probably required to add organic growth factors. Fermentation requires CO2 provided by bicarbonate. When grown aerobically, the cells are yellow due to the production of carotenoid pigments; no pigment is produced under anaerobic conditions. Flexibacter succinicans is a facultative anaerobic bacterium with an optimum temperature of about 25°C and cannot grow at 37°C. The optimum pH is about 7-7.5.

The culture of Flexibacter requires specific formulations of growth media for use in cloning, plasmid DNA preparation, and protein expression. Creative Biogene offers a selection of bacterial growth media and custom services for your specific application. If you are interested in our microbial anaerobic and aerobic culture platform, please contact us for more details.