The cells of Leptothrix are straight rods of 0.6-1.5x3-12 μm, arranged in chains within the sheath, or swim out of the sheath as single cells or pairs of cells. Some species swim out of the sheath by means of short chains of movement powered by more than 8 cells. Among them, one species has fully developed fixators. The sheaths of Leptothrix tend to be filled with or covered by iron or manganese hydroxides. Free cells move with a polar flagella; there is a subpolar flagellar plexus consisting of several flagella. Most species contain poly-β-hydroxybutyric acid globules as intracellular storage material. Sleep state unknown. Gram negative. 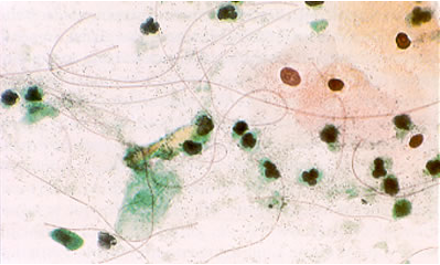 The chemoheterotrophic type of Leptothrix Cultivation is respiratory metabolism and never fermentation. In this process, molecular oxygen is the universal electron acceptor. Various organic acids and sugars can be used as carbon and energy sources, but the number of compounds that can be assimilated by bacteria of the genus Chlamydomonas is less and the reaction is weaker. Most strains require organic compounds (peptone or casamino acids) as nitrogen sources. When there is vitamin B12, the bacteria also utilize a mixture of aspartic acid and glutamic acid, and very few strains assimilate inorganic nitrogen compounds. Biotin and thiamine requirements have been reported for some strains. In contrast to the strains of Chlamydomonas, all the isolated strains could oxidize manganese to manganese oxide.

Leptothrix is strictly aerobic, but can also grow and oxidize manganese under low oxygen pressure. The growth temperature range is 10°-35°C; the optimum temperature is between 20°C and 25°C.

Creative Biogene offers customizable Leptothrix strain culture services. This service can help you obtain Leptothrix cultures for subsequent scientific research. This service allows you to skip the complicated and tedious groping of culture conditions, which helps to speed up research on this strain.

When grown in ferric water, Leptothrix ochracea is characterized by the presence of hydrated ferric hydroxide flocs containing numerous tan, smooth, rather short hollow sheaths. Colorless and pale yellow sheaths containing cell chains can be detected under the microscope. These cells can leave its sheath and form new sheaths at a rate of about 1μm/min. More than 95% of the sheaths were found without exception in enriched cultures of slow-flowing ferrous-containing soil extracts. The sheath thickens after the cell has left the sheath.

Leptothrix pseudoochracea is a bacillus arranged in chains within a thin sheath or swimming outside the sheath. On basal agar with 0.1% peptone and 0.1% glucose, sheath cells grow into concentric rings. Free cells actively move with a single polar flagella; in addition, free chains of up to 8 cells can also move. In a slow-flowing ferrous-containing soil soak, the sheaths are filled with hydrated ferric hydroxide and turn yellow-brown. The sheath surface is smooth or slightly granular. Under these conditions, many sheaths are empty. In manganese-containing media, the sheath is covered by small particles of manganese dioxide. On Mn2+ containing agar, the brown colonies were completely filamentous, with a width of more than 10 mm. Moderate growth in basal medium with peptone or aspartate and glutamate as nitrogen source and glucose as carbon compound.

The cells of Leptothrix cholodnii are usually 1-1.3X2-5μm. Single cells move with a thin polar flagella. The cells are arranged in chains in a sheath, which is thickly bound with manganese oxide in the presence of manganese ions. Colonies on peptone dextrose agar can reach 5 mm in diameter. In many strains, there is a strong natural differentiation and produces smooth colonies instead of the usual rough colonies. The smooth strains are not as oxidative as the rough strains in terms of oxidation of Mn2+. Contrary to other species, a high concentration of organic nutrients stimulates its growth.

Single cells of Leptothrix lopholea move with a subpolar clump of flagella. In this respect, they are similar to Sphaerotilus natans. Cells are generally arranged in short filaments radiating from a cluster of fixators; when grown in liquid medium, many tiny clusters are produced. Under such conditions, the accumulation of manganese oxide, especially iron oxide, on the fixator clusters was much more pronounced than on the mycelium. In liquid cultures, pseudobranching of mycelium was regularly arranged. On the agar medium containing manganese ions, the encapsulation of the sheath by manganese oxide was hindered. Due to this inhibitory effect, the colonies were first white and then gradually turned dark brown.

The culture of Leptothrix requires specific formulations of growth media for use in cloning, plasmid DNA preparation, and protein expression. Creative Biogene offers a selection of bacterial growth media and custom services for your specific application. If you are interested in our microbial anaerobic and aerobic culture platform, please contact us for more details.