Hyphomonas cells move with a single subpolar flagella, which often remains after the stalk and daughter cells have grown. The mother cell often drags the daughter cells to move. During the culture, no endospores, conidia or chlamydospores were found.

Staining for Hyphomonas is Gram-positive and non-acid-fast. Good staining with aniline dyes, neutral red, gentian violet, etc. The use of Lugol's iodine solution as a mordant facilitates the staining of narrow hyphae. The best results are obtained by staining with the silver penetration method. When isolated on solid media, colonies appear as either smooth ("S" type) or rough ("R" type). Smooth colonies are moist and translucent round protrusions. They are easily emulsified. S-type bacteria have thick capsules on mother cells, but generally not on hyphae or buds. Rough colonies are rare, they are generally smaller and appear dry and wrinkled. After a few days in culture, the colony will form a central pit. The bacteria that form coarse colonies are not easily emulsified and suspended, so they remain granular. They are non-capsulated and immobile. S-type is a stable mutant strain, and R-type can be separated into two derivatives, S-type and R-type.The often bulky capsules of S-type bacteria are easily stained with Ziehl's hot carbolic acid fuchsin. Hyphomonas growths on the broth appeared as brittle films. 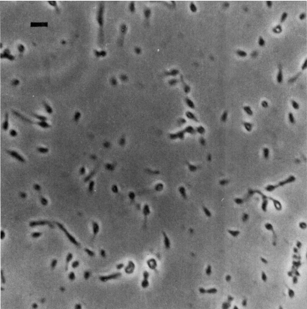 Hyphomonas are aerobic bacteria and are positive for contact enzymes and peroxidase. The bacteria are heterotrophic bacteria. It does not liquefy gelatin, does not coagulate plasma, and does not form pigments. It has no activity against Staphylococcus aureus, Streptococcus sp., Escherichia coli or Candida albicans.

The optimum growth temperature for Hyphomonas is 37°C. Slow growth at 18-20°C, better growth at 30°C. The optimum pH is 7.0-7.4, and its growth range is 6.5-8.5. Poor or no growth on acidic media typically. Its growth is not affected by light. It does not grow on poor media like tap water containing KNO3 and phosphate. It does not grow on inorganic salt media containing CaCO3, formate, acetate, propionate, lactate, methanol, ethanol, glycerol or glycine as the sole carbon source. The bacteria does not decompose arabinose, rhamnose, xylose, glucose, fructose, galactose, lactose, sucrose, maltose, trehalose, melibiose, raffinose, amidon, inulin, dextrin, glycogen, escin, glycerin, erythritol, mannitol, sorbitol or urea. Grow well in clotted serum, gelatin, blood agar, Loewenstein-Jensen medium, Dorset-agar and other rich media. It can reduce nitrate, nitrite, neutral red, methylene blue and janus green. In addition, the bacteria can produce H2S and NH3, and can utilize tryptophan to form indole. In the antibiotic tolerance test, Hyphomonas showed resistance to the therapeutic concentration of penicillin, bacitracin or furadoine, while chloramphenicol, streptomycin, neomycin and sulfonamides had a great inhibitory effect on the bacteria. Tetracycline and erythromycin are slightly less inhibited.

Pure cultures can survive for several months at room temperature or in the refrigerator if suspended in growth medium.

Creative Biogene offers customizable Hyphomonas strain culture services. This service can help you obtain Hyphomonas cultures for subsequent scientific research. This service allows you to skip the complicated and tedious groping of culture conditions, which helps to speed up research on this strain.

Hyphomonas polymorpha is the type strain of Hyphomonas, and its morphological characteristics are consistent with those of the above Hyphomonas.

The culture of Hyphomonas requires specific formulations of growth media for use in cloning, plasmid DNA preparation, and protein expression. Creative Biogene offers a selection of bacterial growth media and custom services for your specific application. If you are interested in our microbial anaerobic and aerobic culture platform, please contact us for more details.