Rhodomicrobium is an ovoid to long ovoid bacteria that reproduces by budding. The daughter cells originate from the spherical buds at the ends of the mother cell filaments. The mature buds can be separated from the filaments, and they move with the peripheral flagella. Rhodomicrobium belongs to Gram-negative bacteria. The bacterial cell contains chlorophyll A and carotenoids, both of which are located on the lamellar inner membrane. The bacteria does not contain air bubbles. 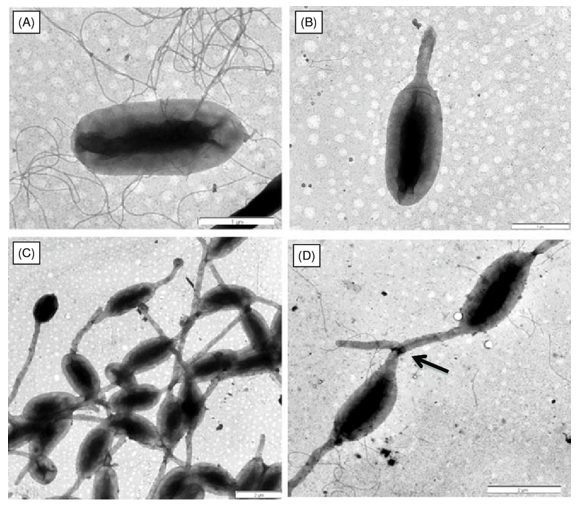 Figure 1. Pattern of development in the reproduction cycle of Rhodomicrobium vannielii from negative preparation viewed by TEM. (Faith-Anthony et al.; 2011)

Rhodomicrobium belongs to anaerobic phototrophic bacteria; in addition, most of the strains can grow and undergo oxidative metabolism in the dark, under microaerobic to aerobic conditions. It can carry out photosynthesis when there are simple organic carbon compounds, and these compounds have the function of direct light assimilation and fixation of carbon dioxide. Among them, molecular hydrogen can be used as an electron donor. During photosynthesis, molecular oxygen is not released. Due to photosynthetic pigment, the cell suspension showed various colors from pink to reddish brown.

Rhodomicrobium Vannielii has mature cells that are oval to lemon-shaped, and the cell size is 1-1.2×2-2.8 micrometers. Some hyphae cells can grow to 4 micrometers. Young cells are spherical, and they grow on buds at the top of filaments that are about 0.3 microns wide and 1 to several times longer than the mother cell. Depending on the conditions, the mature bud can remain on the filament and form another filament on the opposite end; it can also be separated from the filament and become a mobile cell that can move around the flagella. A mature cell can form up to three daughter cells: one is formed on the primary filament at the top of the cell, and one or more daughter cells are the lateral growth of the primary filament born in the first daughter cell. Under certain conditions (such as high pH), because the cells tend to remain on the filaments, the main growth uniformity is the formation of aggregates containing many cells. In addition to normal cells, several strains can form characteristic polygonal cells with a diameter of 1-1.5 microns and 3-5 spheroids; there can be 1-4 on the same branch point at the end of a filament Such bud cells have higher heat resistance than ordinary vegetative cells.

The bacteria have a photosynthetic membrane system. The parallel lamella structure is under and connected to the cell plasma membrane; there is no lamella structure in the filaments. In shake tube, the colonies were dark orange-red to brown, irregular and had a rough and convex surface. The liquid culture of anaerobic growth is initially cloudy, then becomes granular and flocculent; the color ranges from ocher pink to deep orange red or orange brown. The aerobic cell culture medium is colorless to orange-brown.

The culture of Rhodomicrobium requires specific formulations of growth media for use in cloning, plasmid DNA preparation, and protein expression. Creative Biogene offers a selection of bacterial growth media and custom services for your specific application. If you are interested in our microbial anaerobic and aerobic culture platform, please contact us for more details.