Cytophaga's cells are single, short or elongated flexible rods or filaments. Cells are 0.3-0.7 × 5-50μm in size, with rounded or pointed ends. Bacterial cells can slide and are Gram-negative. 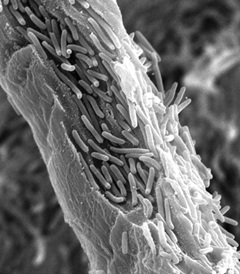 The bacterium utilizes respiratory metabolism for organic energy nutrition and molecular oxygen as electron acceptor. In addition, nitrate can act as an alternative electron acceptor. Its respiratory or fermentative end products are acetate, propionate, and succinate. It is possible to decompose one or several polysaccharides such as agar, cellulose or chitin, or to depolymerize hydroxymethylcellulose. Some species require the addition of organic auxin.

Cytophaga is strictly aerobic or facultatively anaerobic. The optimum temperature measured is 20°-30°C.

Cytophaga hutchinsonii cells are often flexible single rod-shaped, 0.3-0.5 × 2.0-10.0 microns in size. Circular bodies and abnormally long morphologies may appear in old cultures. On agar or silica media containing salt and fibrous cord (filter paper) or glucose, the growths were viscous. At the same time, the liquid medium becomes viscous due to the production of extracellular mucus. When there is filter paper placed on the surface of agar or silica medium, the filter paper around the colonies is dissolved, so a translucent area appears. Colonies protrude on dextrose medium.

Cytophaga hutchinsonii produces energy from respiratory metabolism and can utilize molecular oxygen as the final electron acceptor. Fructose, mannitol and mannose are not suitable carbon and energy sources. As with many amino acids, proteins and yeast extracts, ammonia or nitrate ions are suitable nitrogen sources. Amino acids, protein, protein, yeast extract or nutritious agar cannot be the only source of carbon and energy. When the bacteria are cultured, it is not necessary to add organic auxin to the medium. Approximately due to the presence of carotenoid pigments, the cells are yellow. Cytophaga hutchinsonii are strictly aerobic bacteria.  The optimum growth temperature is 30°C. The optimum growth pH is 7.0-7.5.

The cells of Cytophaga rubra are flexible single rods with a size of 0.5-0.7×3.5-11 microns. Circular plastids may appear in old cultures. Small amounts of extrasporous mucilage were produced on cellulose agar or in liquid medium. The bacteria can only partially decompose the filter paper. On glucosaline agar media, colonies were consistently small (2mm in diameter) and sank into the agar, with a fuzzy perimeter.

Cytophaga rubra produces energy through respiratory metabolism, using molecular oxygen as the final electron acceptor. Mannose is a suitable carbon and energy source for the bacteria, while fructose and mannitol are not. Ammonium and nitrate ions and various amino acids, peptone and yeast extract can be used as nitrogen sources. But amino acids, peptone, protein, nutritious agar or yeast extract cannot be used as the only source of carbon and energy. During cultivation, the addition of organic growth factors to the medium is not required. Bacterial cells are pinkish approximately due to carotenoid pigments. Cytophaga rubra is a strictly aerobic bacteria, and its optimum growth temperature is 30℃.

Cytophaga johnsonae usually produces energy through respiratory metabolism, using molecular oxygen as the final electron acceptor. However, one strain can use nitrate as an alternative electron acceptor for denitrification. Although dulcitol and mannitol cannot be used as carbon sources and energy sources, inulin, lactose, maltose, raffinose and sucrose can be used as carbon sources and energy sources. Ammonium or nitrate ions or peptones are suitable nitrogen sources, and peptones and other complex nitrogenous compounds can serve as both carbon and nitrogen sources. Cytophaga johnsonae does not require organic auxins during culture.

Cells appear yellow approximately due to the presence of carotenoid pigments. Cytophaga johnsonae belongs to strictly aerobic bacteria, except for the strains with denitrification. The optimum growth temperature is 25-30°C.

Cytophaga krzemieniewskae cells are flexible single rods with blunt ends, 0.5-1.5×5-20μm. As a result of the digestion of the agar and the sliding movement of the organisms, well-defined colonies cannot be formed on the agar medium. The growths start out pink and rapidly expand into a thin film that is only visible, and after a few days the older parts gather into droplet-like clumps, thus forming an uneven surface image. In about a week, the diffuse brown-black pigment masks the pink. The bacteria can liquefy agar rapidly and almost completely.

Cytophaga krzemieniewskae can use molecular oxygen as the final electron acceptor. The bacteria can decompose alginic acid, and can utilize lactose and maltose. Yeast extract or peptone is the only known carbon source. Cells are pink approximately due to carotenoid pigments.

The culture of Cytophaga requires specific formulations of growth media for use in cloning, plasmid DNA preparation, and protein expression. Creative Biogene offers a selection of bacterial growth media and custom services for your specific application. If you are interested in our microbial anaerobic and aerobic culture platform, please contact us for more details.