The mycelium of Crenothrix is up to 1 cm long, attached to a solid substrate, and the free ends may be enlarged. The mycelium is not branched, but can appear pseudo-branched. The thin sheaths surrounding the mycelium may be colorless at the tips, or embedded with iron (or manganese) oxides at the base. The cells are cylindrical to disc-shaped and divide by the diaphragm in normal mycelium, and divide by diaphragm and mediastinum at the tip of the enlarged mycelium.   The cells in the mycelium end are smaller and may be rounded. Sometimes there is only one row of such cells in the end of the mycelium. Larger rod-shaped cells can also slip out of the sheath and form new mycelia. Crenothrix is not athletic. Under natural conditions, it is found in stagnant and flowing water containing organic matter and iron salts.

Creative Biogene offers customizable Crenothrix strain culture services. This service can help you obtain Crenothrix cultures for subsequent scientific research. This service allows you to skip the complicated and tedious groping of culture conditions, which helps to speed up research on this strain.

Individual mycelium diameters of Crenothrix polyspora can vary from 1-6 microns at the base and 6-9 microns when enlarged at the apex. Each mycelium is wrapped in a colorless sheath that later becomes rust-colored. This change usually occurs at the base, which is due to the precipitation of iron. 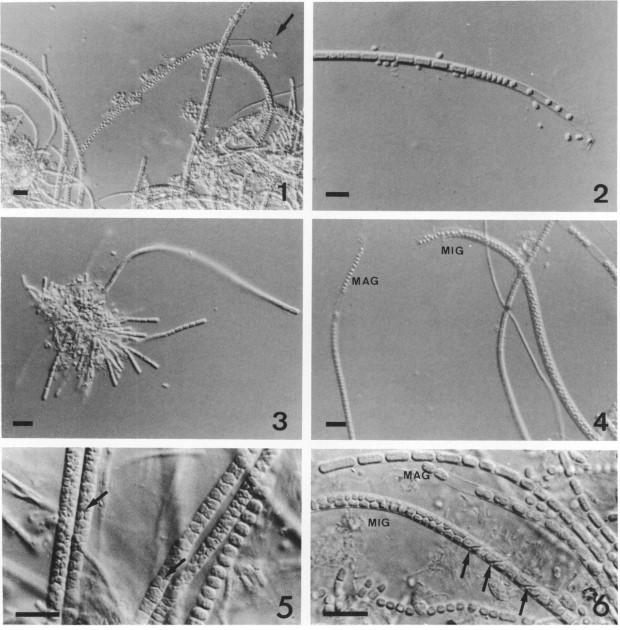 The cells in the mycelium of Crenothrix polyspora are more or less rectangular. It can reproduce by horizontal division in the sheath or by both vertical and horizontal divisions at the end of the swollen mycelium. The reproductive cells are called "conidia," but they form in a distinctly different way than the true conidia of fungi. The smallest reproductive cells are generally round, 1-2 microns in diameter. They are occasionally only 0.6-0.8 microns wide. Larger propagating cells can be up to 5 microns in diameter. After release, reproductive cells can germinate on the outside of the end of the sheath, producing a new mycelium that can be mistaken for a pseudobranch. Propagating cells can be sticked together by sticky substances to form agglomerates. Originally isolated from a spring water sample near Breslau, Germany. Widely distributed in water containing iron and organic matter, in drains and springs. In addition, the bacteria can also be found in stagnant, flowing and urban water supplies. In these locations it grows as dense light brown clumps.

The culture of Crenothrix requires specific formulations of growth media for use in cloning, plasmid DNA preparation, and protein expression. Creative Biogene offers a selection of bacterial growth media and custom services for your specific application. If you are interested in our microbial anaerobic and aerobic culture platform, please contact us for more details.