The vegetative cells of Stigmatella are rod-shaped with pointed ends.

Sporangia are attached singly or in clusters on stalked fruiting bodies (stalks often grow in groups on a common basement membrane).

Its minimum nutritional requirements are not known, but are easily grown on protein media containing enzymatic hydrolysis. The bacteria can usually hydrolyze urea.

Stigmatella belongs to aerobic bacteria. The growth temperature range is 18°-37°C; the optimum temperature is 30°C.

The vegetative cells of Stigmatella aurantiaca are rod-shaped, with a pointed end and a size of 0.6-1.0×4-10 microns. 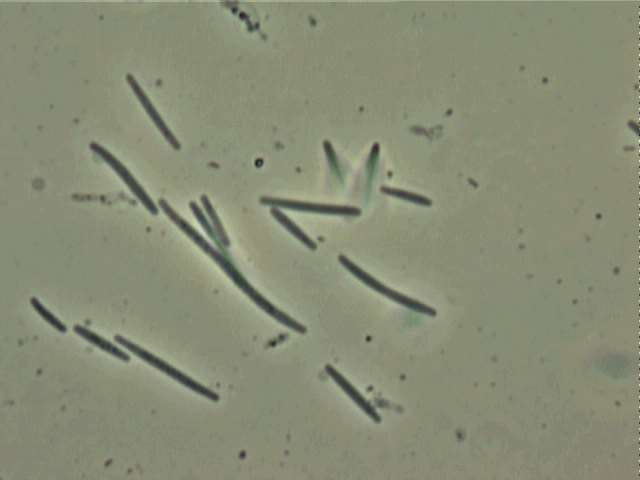 The sporangia are spherical, oval, pear-shaped or columnar, yellow-orange to bright orange-red or reddish-brown, and vary in size, 16-70 × 25-102 microns. May be sessile at maturity, if at all, up to 40 µm long. Sporangia up to 400 µm long, usually unbranched, sometimes emanating from a common origin, in clusters of granular arrangements, without striations, forming a hardened mucus that also contains cells, cells colorless or with The sporangia are the same color. The morphology of fruiting bodies varies in culture.  On simple agar media with contaminating microorganisms, the bacterium is often observed with white to orange sporangiophores, up to 900 microns long, irregularly branched, or without sporangia or with one or a few sporangia on top, the protocystic type are also common. When on water agar containing Ca2+ ions, the fruiting bodies have one or several sporangia.

Microsporangium size is 0.9-1.2 x 1.6-4.0 microns (average 1.0 x 2.8 microns). Vegetative colonies are thin, flat, and have many radial, concentric ridges with well-defined edges. Some colonies have thin, filamentous edges and are difficult to see. The color of the vegetative colonies is light yellow or flesh color, and the color of the agar culture medium is reduced to a yellowish or brownish color.

On 0.1% Casitone or E. coli medium, orange clumps were often formed in old cultures, but no fruiting bodies were formed. Continuous culture in the laboratory produces variants capable of forming slime colonies.

It is easy to grow in agar medium or liquid medium containing 0.1-0.2% hydrolyzed protein, starch and 0.01M Mg2+, or in medium containing dead bacterial cells. The bacteria can not reduce nitrate, can produce contact enzymes, but cannot produce oxidase. In the medium can hydrolyze starch, Tween 80, quinol acetate, RNA, DNA, gelatin, cheese, urea and esculin.

The vegetative cells of Stigmatella erecta are slightly pointed, flexible rods, 0.7-0.8×5-10 microns in size. The sporangia are spherical, oval or elongated, initially flesh-colored, gradually becoming orange-red, and finally dark chestnut-brown, or almost black at maturity, 30-90×35-140 microns in size. Sometimes (especially in rabbit droppings) sporangia are solitary on opaque white, later yellowish sporangia stalks. Sporangiophores are attached in bundles on a common basement membrane. Other types have several sporangia arranged in clusters on yellow-white to orange sporangia. Sporangia may or may not be attached to the stalk. In both types, the sporangia stalk (and stem) generally atrophy and allow the sporangia to settle on the substrate, thus appearing to be a sessile mass of 50-100 sporangia. On rabbit dung pellets, the fruiting bodies can appear as protosac-like masses, or pink-white coral-like deposits or salmon-colored finger-like protrusions, and there is no obvious sporangium boundary. The top eventually turns dark brown, and the rest of it turns yellow-white. On Ca2+water agar media, the fruiting body had 1-4 sporangia, which were attached to the stalk with few branches (80-200×30-50 microns).

Vegetative colonies start out thin and transparent, and later turn yellow or pale flesh-colored with many radial ridges. The colony margins are thin and unclear. Continuous culture in the laboratory allows selection of variants with yellow or orange slime colonies.

Stigmatella erecta does not reduce nitrate, can produce contact enzymes, but does not produce oxidase. The bacteria can hydrolyze starch, Tween 80, succinol acetate, CNA, RNA, gelatin, cheese, urea and esculin.

The culture of Stigmatella requires specific formulations of growth media for use in cloning, plasmid DNA preparation, and protein expression. Creative Biogene offers a selection of bacterial growth media and custom services for your specific application. If you are interested in our microbial anaerobic and aerobic culture platform, please contact us for more details.