The filaments of Thiothrix consist of short, cylindrical or oval cells with clear, colorless, unbranched walls between cells. Filaments are usually uniform in diameter, but under certain conditions taper from base to tip. In nature, the filaments of Thiothrix are usually attached to the substrate with inconspicuous anchors, and sessile. The filaments of this bacterium cannot slide, but often fluctuate from one end to the other. This is caused by the diffusion of gonidia (gonidia, a type of single cell produced from the cell mass of filaments, usually released from the tip, but sometimes from between the filaments) on a solid substrate Often (but not always) there is a jerky sliding motion. In addition, the bacteria form rosette. Although this structure often occurs in culture, it is rare in nature. Rosettes may be formed from gonidia or filaments which several or more anchored at their bases. Filaments of Thiothrix often form true nodules in culture, which are rare but may occur in nature. In many respects they are similar to blue-green algae, except that they do not form photosynthetic pigments. Thiothrix is a strictly aerobic bacteria and obtains energy through chemo-organic nutrition. Thiothrix precipitates sulfur particles in cells. In places deficient in H2S, Thiothrix may lose sulphur particles, much like Leucothrix. Filaments are usually anchored to a solid substrate and are immobile, relying mainly on gonidia diffusion to form rosettes.  It usually grows in places with high concentrations of H2S. In freshwater habitats, it is most commonly found in sulphurous springs and factory sewers, and is particularly suitable for growing in running water. In marine environments, Thiothrix is commonly found in sulphurous springs entering the sea, or in seaweeds that decompose to produce hydrogen sulfide, but is usually found in flowing water and anchored to algae. Clearly, Thiothrix is strictly autotrophic.

Creative Biogene offers customizable Thiothrix strain culture services. This service can help you obtain Thiothrix cultures for subsequent scientific research. This service allows you to skip the complicated and tedious groping of culture conditions, which helps to speed up research on this strain. 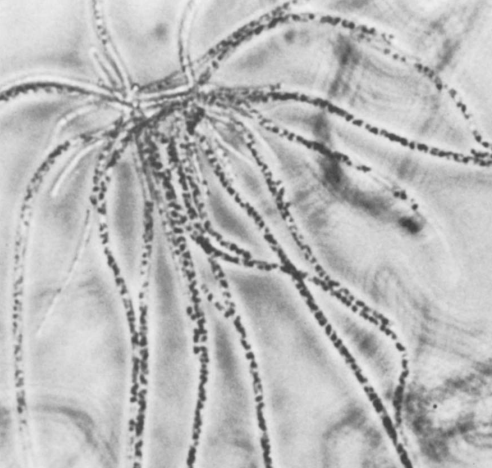 Thiothrix nivea has the same characteristics as the genus description.

The culture of Thiothrix requires specific formulations of growth media for use in cloning, plasmid DNA preparation, and protein expression. Creative Biogene offers a selection of bacterial growth media and custom services for your specific application. If you are interested in our microbial anaerobic and aerobic culture platform, please contact us for more details.