Amoebobacter is a spherical to ovoid bacterium that reproduces by binary division and is immobile. Amoebobacter is a gram-negative bacteria. Bacterial cells contain bacteriochlorophyll a and group 1 of carotenoids, which are located on the inner membrane of the cystic type. There are air bubbles in the central part of the cells. 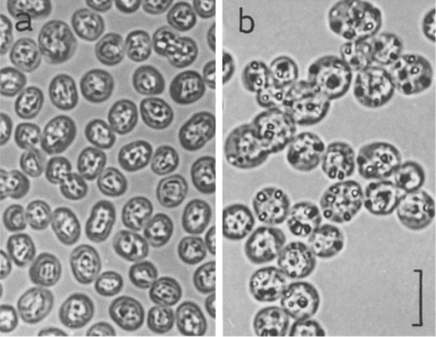 Amoebobacter is anaerobic. In the presence of hydrogen sulfide, bacteria can photosynthesize and produce elemental sulfur as an intermediate oxide. The elemental sulfur produced is spherical and is stored in the surrounding part of the cell without air bubbles. Molecular hydrogen can act as an electron donor. Molecular oxygen is not released during photosynthesis. Due to the photosynthetic pigments, the cell suspension takes on a reddish to purplish red color.

Rhodothece, which is a spherical, immobile, bubble-containing type, is treated as a later synonym of the Amoebobacter.

Amoebobacter roseus cells are 2.0-3.0 microns in diameter. Individual bacterial cells and irregular cell aggregates of varying sizes are surrounded by a sticky capsule. Single cells are colorless, and the color of cell suspensions is light red.

Amoebobacter roseus is an obligate photoautotroph and is strictly anaerobic. The optimum pH range for growth is: 6.5-7.5; the optimum temperature for growth: 25°-30°C. In photosynthesis, photosynthetic electron donors are sulfides, sulfur, thiosulfates or sulfites. In the presence of sulfide and bicarbonate, the bacteria can utilize acetate, fructose, malate, pyruvate and certain amino acids for photosynthesis. In addition, it was found that type species were unable to utilize other sugars, sugar alcohols, alcohols and most intermediates in the tricarboxylic acid cycle. Amoebobacter roseus normally lives in light-exposed hydrogen sulfide-containing mud and stagnant water or hot springs under natural conditions.

Amoebobacter pendens cells are 1.5-2.5 microns in diameter. Individual cells and irregular cell aggregates of varying sizes are enclosed by a sticky capsule. Under good culture conditions, the mucus produced by the colonies is so abundant that the culture becomes sticky. Individual cells are colorless, and cell suspensions are pink.

The culture of Amoebobacter requires specific formulations of growth media for use in cloning, plasmid DNA preparation, and protein expression. Creative Biogene offers a selection of bacterial growth media and custom services for your specific application. If you are interested in our microbial anaerobic and aerobic culture platform, please contact us for more details.