The vegetative cells of Cystobacter are elongated, pointed, and flexible rods. The sporangia are sessile, singly or in groups, round or coiled, and are enclosed in a distinct mucus coat or wall; some sporangia are bare or embedded in a secondary mucus layer. 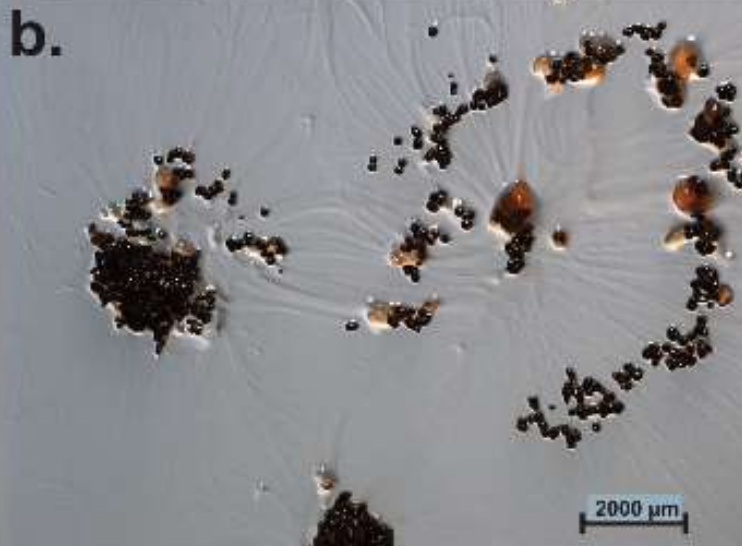 Microsporangia are rod-shaped, dense optical properties or refracting, and hard in texture.

The vegetative colonies do not etch or corrode the agar culture medium and can adsorb Congo red.

The minimum nutritional requirements are unclear, but all species grow readily in media containing enzymatically hydrolyzed proteins, salts, and starch or glycogen, but cannot digest cellulose.

The vegetative cells of Cstobacter fuscus are gradually tapering rods, 0.6-0.8×3-20μm in size.

The sporangia are smooth, flesh-colored when young, and light to dark chestnut brown when mature. The sporangia are spherical or oval, 50-150 microns in diameter, and have distinct membranes. 100 or more sporangia form spore mounds embedded in a smooth gelatinous substrate. The spore piles are flat or piled up, and occasionally sporangia chains grow finger-like protrusions. In some types, the substrate is replaced by a folded outer membranous layer.

Microsporangia are rod-shaped, often fusiform and curved, with dense optical properties or significant refraction, with a size of 0.4-1.5×2.5-5.0μm.

On Casitone-Mg2+ agar-agar medium, vegetative colonies grew rapidly and thickly, starting with flattened and distinct edges, and later with protuberances, veins, ridges, or punctate-expanded accumulations at the edges. When young, the colonies change from yellow to yellow-orange, then turn salmon or brown-orange. Older colonies are smooth mucus and translucent, and may produce a brownish pigment in the medium. The vegetative mucus is sticky and difficult to cut. Colonies were easily picked up completely from the surface of the agar. The colonies were thinner and less colored both on E. coli medium and on fecal agar culture medium. Fruiting bodies were formed on both media with freshly isolated strains.

In the Casitone-Mg2+ broth, the fungus grows in large numbers, with yellow to orange color, loose spherical shape, or a kind of thick turbidity. After a period of incubation, the medium became viscous and turned brown with age.

It is generally easy to grow on the complex media used by non-fibrinolytic Myxobacteria. The bacteria cannot reduce nitrate, but can hydrolyze esculin, starch, casein, gelatin, Tween 80, indoxyl acetate, RNA and DNA.

The vegetative cells of Cystobacter minus are 0.6-0.8 x 3-11 μm in size, slightly pointed in shape, and slightly square at the ends, similar to the ends of transitional Protocystis. The sporangia are spherical or oval, 20-70×20-50 microns in size. It starts out light pink, then turns light brown. There is a distinct wall, the thickness of which is 0.5-1.0 microns, and is transparent, and the inclusions can be seen. The sporangia are surrounded by a thin, transparent mucus layer and appear as flattened accumulations measuring 0.5μm2 in area. Secondary sporangia may form within the original sporangia due to condensation of the sporangia contents and new wall formation.

The optical characteristics of microspores are dense or refracting, the shape is oval to short rod, and the size is 0.8-1.2×1.3-3.7 microns.

On Casitone-Mg2+ agar media, colonies were gray and translucent, or light pink with distinct edges, which were later thinned and blurred. There are many loose spiral stripes on the surface of the colony.

Cystobacter minus can be grown on Casitone-Mg2+ medium, E. coli medium and Yeast extract-Ca2+ agar medium. The bacterium does not reduce nitrate and can hydrolyze starch, esculin, RNA and DNA.

The vegetative cells of Cystobacter ferrugineus are slightly pointed, with rounded ends, and the size is 0.6-0.8×4-15 microns. Dormant accumulations are composed of irregular, branched, occasionally retracted rolls. Begins gray or flesh-colored and later turns bright orange-yellow, orange-red or reddish-brown.  There may be no enclosing membrane, or there may be an enclosing membrane, but it is difficult to observe due to the imprinting of microcysts. The outer mucus layer is colorless to yellow-orange.

Vegetative colonies are grayish-white to pale salmon-colored, with many fine radial ridges and concentric corrugations, the latter being more transparent in the central portion. The edges are slightly bulky at first, then thin and have tongue-like protrusions.

It is easy to cultivate on Casitone-Mg2+ medium, E. coli medium and fecal agar.  Both oxidase and urease were negative and did not hydrolyze esculin.

The culture of Cystobacter requires specific formulations of growth media for use in cloning, plasmid DNA preparation, and protein expression. Creative Biogene offers a selection of bacterial growth media and custom services for your specific application. If you are interested in our microbial anaerobic and aerobic culture platform, please contact us for more details.