Escherichia coli is a rod-shaped gram-negative bacterium normally resident in human and other mammalian colons. It can grow rapidly on minimal medium that contains a carbon compound such as glucose (which serves both as a carbon source and an energy source) and salts that supply nitrogen, phosphorus, and trace metals. E. coli grows more rapidly, however, on a rich medium that provides the cells with amino acids, nucleotide precursors, vitamins, and other metabolites that the cell would otherwise have to synthesize. 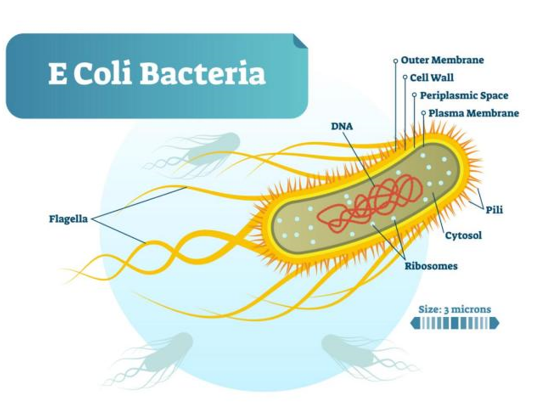 When E. coli is grown in liquid culture, a small number of cells are first inoculated into a volume of sterile medium. After a period of time, called the lag period, the bacteria begin to divide. In rich medium a culture of a typical strain will double in number every 20 or 30 min. This phase of exponential growth of the cells in the culture is called log phase (sometimes subdivided into early-log, middle-log, and late-log phases). Eventually the cell density increases to a point at which nutrients or oxygen become depleted from the medium, or at which waste products (such as acids) from the cells have built up to a concentration that inhibits rapid growth. At this point, which, under normal laboratory conditions occurs when the culture reaches a density of 1–2 × 109 cells/ml, the cells stop dividing rapidly. This phase is called saturation and a culture that has just reached this density is said to be freshly saturated. With very few exceptions, the bacterial strains used in recombinant DNA work are derivatives of E. coli strain K–12. E. coli K-12 remains the preferred host for most molecular biological manipulations. Many key advances in molecular biology came from studies of this organism and of the bacteriophages (many derived from λ) and plasmids that use it as a host.

The culture of E. coli requires specific formulations of growth media for use in cloning, plasmid DNA preparation, and protein expression. Creative Biogene offers a selection of bacterial growth media and custom services for your specific application. If you are interested in our microbial anaerobic and aerobic culture platform, please contact us for more details.