Developing an effective, safe and target-specific drug delivery system to potentiate therapeutic actions and reduce the side effects, has significant meanings for clinical therapy. The properties of microorganisms like self-propulsion, in-situ production of therapeutics, penetration into the tumor cells, increase in immunity, etc. are of interest for the development of a highly effective delivery carrier. A bacterial delivery system would have to incorporate three essential components:
(1) synthesis of protein drugs
(2) invasion into cells
(3) release of the drugs

Protein synthesis can be controlled with the bacterial translation machinery. Control of invasion is necessary to carry the produced proteins into cells. Invasion requires both flagella and the type III secretion system-1 (T3SS-1). Flagella are essential for cell invasion because they sense the cell surface and determine the optimal location for invasion32. T3SS-1 is a needle apparatus that initiates invasion by injecting effector proteins into cells. These proteins rearrange the actin cytoskeleton and induce endocytosis of the bacteria. Production of these two bacterial structures is controlled by the factors fliZ and hilD, which are, in turn, controlled by the master regulator flhDC. Protein release requires the activation of bacterial genes specifically inside cells. In Salmonella, this can be controlled with the promoters of SPI2 genes.

Live bacterial vectors may be useful tools for the development of novel cancer therapies that can be added to the repertoire of existing drugs. Unlike traditional delivery vehicles, bacteria manufacture protein drugs at the disease site, delivering exponentially more molecules than were originally present in the injected bacteria. This specificity is the result of exponential growth in tumors, coupled with concurrent clearance from healthy organs. Two potential protein drugs that exclusively affect intracellular proteins are the central domain of nuclear inhibitor of protein phosphatase 1 (NIPP1-CD) and constitutive two-chain active caspase-3 (CT Casp-3). NIPP1-CD induces cell death by competitively disrupting PP1 holoenzymes47. CT Casp-3 is an engineered form of caspase-3 that does not require intracellular activation. Caspase-3 is the dominant executioner caspase that causes apoptotic cell death.

Critical cancer pathways often cannot be targeted because of limited efficiency in crossing cell membranes. Many facultative or obligate anaerobic bacteria, such as Clostridium, Bifidobacterium, Listeria, Escherichia coli, and Salmonella species, possess inherent tumor-targeting and tumor-killing activities. Engineering bacteria to minimize their virulence against the host immune system is also essential. A Salmonella-based intracellular delivery system has been developed in cancer treatment. Engineered genetic circuits can activate the regulator flhDC to drive invasion and induce lysis to release proteins into tumor cells. Released protein drugs diffuse from Salmonella containing vacuoles into the cellular cytoplasm where they interact with their therapeutic targets. Control of invasion with flhDC increases delivery hundreds of times. The autonomous triggering of lysis after invasion makes the platform self-limiting and prevents drug release in healthy organs. Bacterial delivery of constitutively active caspase-3 blocks the growth of hepatocellular carcinoma and lung metastases, and increases survival in mice. This success in targeted killing of cancer cells provides critical evidence that this approach will be applicable to a wide range of protein drugs for the treatment of solid tumors. 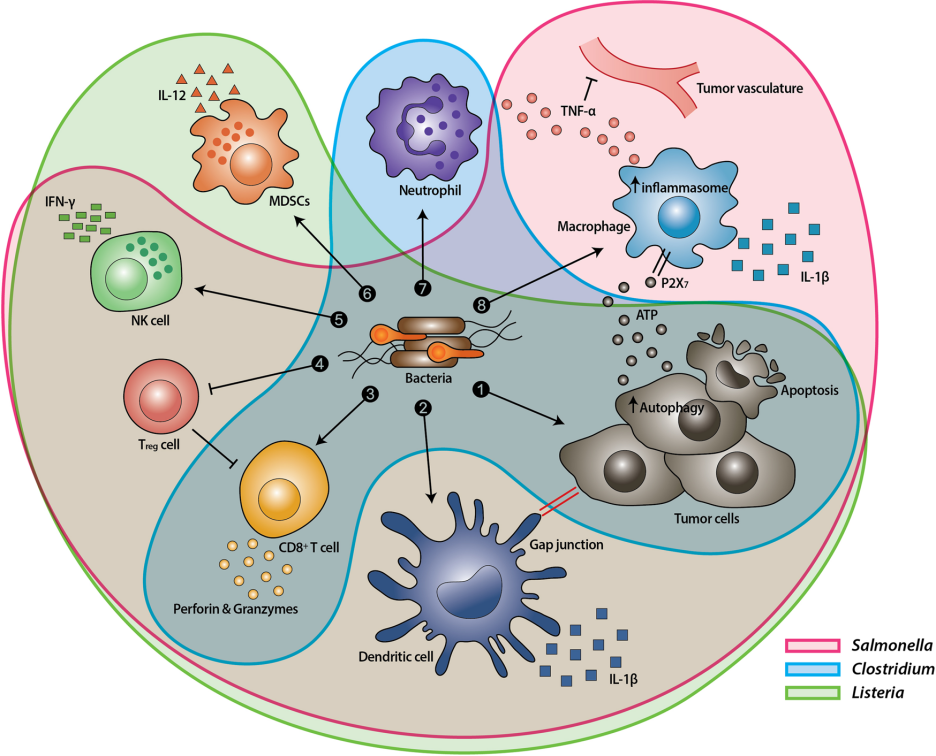 In addition, bacteria, anti-cancer oncolytic viruses, viral vectors (gene therapy) and viral immunotherapy are the attractive areas of biotechnological research. Creative Bigene provides development services for microbe-based drug delivery systems. If you are interested in our services, please contact us for more details.