Chromatium is an egg, bean or rod-shaped bacteria that reproduces in dichotomy and moves through the polar flagella. In certain unfavorable conditions and many natural environments, cells cannot move and form almost regular aggregates surrounded by mucus. Growth in an environment with an inappropriate inorganic salt concentration can cause significant swelling, which was previously considered to be a separate genus-baculomonas. The bacteria are gram-negative. The bacteria contain chlorophyll a and carotenoids, both of which are located on the inner membrane of the sac type. There are no air bubbles in the cells.

This genus is an anaerobic bacteria. When the medium contains hydrogen sulfide, photosynthesis can be carried out. At the same time, they produce and store spherical element sulfur in the cell as an intermediate product of oxidation. Among them, molecular hydrogen can be used as an electron donor. During photosynthesis, molecular oxygen is not released. Due to the presence of photosynthetic pigments, the cell suspension presents various shades of orange to brown and pink to violet and purple to red.

The cell size of Chromativm okenii is 4.5-6.0×8-15 microns, with occasionally longer individuals. It can be seen under an optical microscope that the length of the flagella plexus is usually 1.5-2 times that of the cell. Sulfur balls are evenly distributed in the cells. The color of single cells and cell suspensions was purple-red. 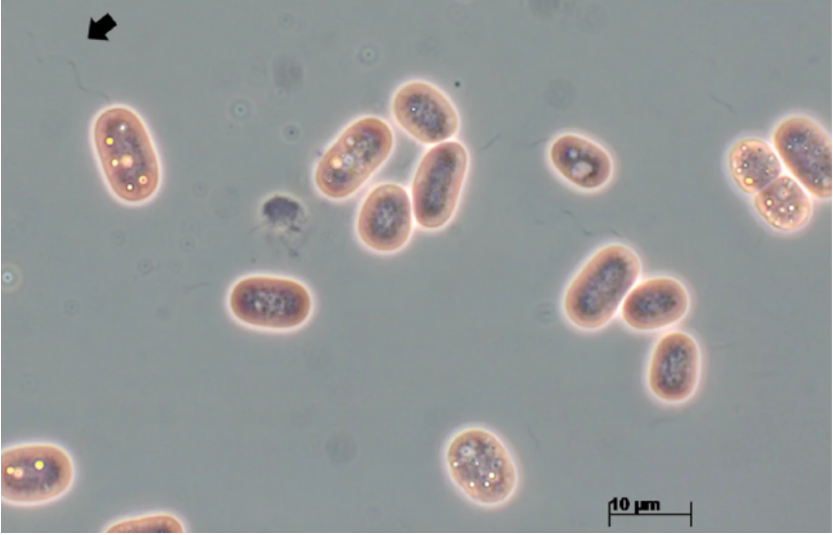 The description is the same as Chromativm okenii except that the cells are 3.5-4.5×7-9 microns.

The cell size of Chromatiurn warmingii is 3.5-4.0×5-11 microns, occasionally longer. Flagellar plexus is usually 1.5-2 times the length of the cell. Under an optical microscope, it can be seen that the sulfur balls are mainly located at the poles of the cell. Due to the additional sulfur balls parallel to the central division plane, the dividing cells appear more obvious. The color of a single cell ranges from gray to very light pink, and the color of cell suspension ranges from purplish red to violet.

The size of Chromatium buderi cells is 3.5-4.5×4.5-9.0 microns in the logarithmic growth phase and about 3-4 microns in the resting phase. The flagella plexus is 1.5-2 times the cell length and can be seen under an optical microscope. Sulfur balls are evenly distributed in the cells. The color of a single cell is gray-yellow, and the color of the cell suspension is purple to violet.

The cells are about 2×2.5-6 microns. Sulfur balls are evenly distributed in the cells. The individual cells are colorless to slightly pink, and the cell suspension is purple to red.

The description is the same as Chromatium vinosum except that the color of the cell suspension is purple-violet.

The cells are about 2×2.5-6.0 microns, sometimes longer. Sulfur balls are evenly distributed in the cells. A single cell is colorless, and the color of the cell suspension is yellow to orange-brown at first, and then brown-red.

Except that the cells are slender and the size is 1-1.3×2-6 microns, the other description is the same as Chromatium vinosum.

Except that the cells are 1-1.2×2 microns, the other descriptions are the same as Chromatium vinosum. Optimal pH: 7-8.

The culture of Chromatium requires specific formulations of growth media for use in cloning, plasmid DNA preparation, and protein expression. Creative Biogene offers a selection of bacterial growth media and custom services for your specific application. If you are interested in our microbial anaerobic and aerobic culture platform, please contact us for more details.