An autotroph or primary producer is an organism that produces complex organic compounds (such as carbohydrates, fats, and proteins) using carbon from simple substances such as carbon dioxide, generally using energy from light (photosynthesis) or inorganic chemical reactions (chemosynthesis). Autotrophic bacteria are those which can grow in a media where the essential compound is not given as a suppliment. For example, autotrophic media may contain no organic carbon or organic nitrogen for an autotroph to grow. 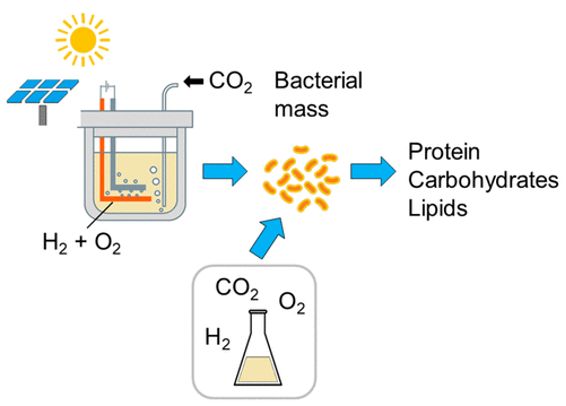 Autotrophic bacteria synthesize all their cell constituents using carbon dioxide as the carbon source. The most common pathways for synthesizing organic compounds from carbon dioxide are the reductive pentose phosphate (Calvin) cycle, the reductive tricarboxylic acid cycle, and the acetyl-CoA pathway. The Calvin cycle is the most widely distributed of these pathways, operating in plants, algae, photosynthetic bacteria, and most aerobic lithoautotrophic bacteria. The autotrophic cultivation requires a constant supply of the gaseous feedstocks H2 and O2.

• These autotrophic bacteria play an important role especially in agriculture ammonia. Sources are manure storage and treatment, composting and animal farms. Oxidation of ammonia to nitrite and nitrate, named nitrification, is done by specialized autotrophic bacteria.

• Syngas fermentation, based on the autotrophic batch cultivation, a microbial process in which synthesis gas serves as a substrate for acetogens, has attracted increasing interest recent years. For the purposeful selection of acetogens for various applications, it would be useful to characterize and compare the process performances of as many autotrophic strains as possible under identical process conditions.

• Production of bacterial protein for food and feed, so-called single cell protein (SCP), has been of increasing interest during the past two decades.

We have established a mature technical platform to culture various microorganisms that can be isolated from readily available sources. If you are interested in our autotroph cultivation services, please contact us for more details.