The vegetative cells of Polyangium are cylindrical, uniform in diameter, with blunt ends. The sporangia are sessile, solitary or in clusters, often bound by a common coating or mucus layer. Myxospores resemble vegetative cells, are non-refractive or dense in optical properties, and have no mucoid capsules in the species tested. Colonies of the species studied all etch, corrode and penetrate agar and do not adsorb Congo red. 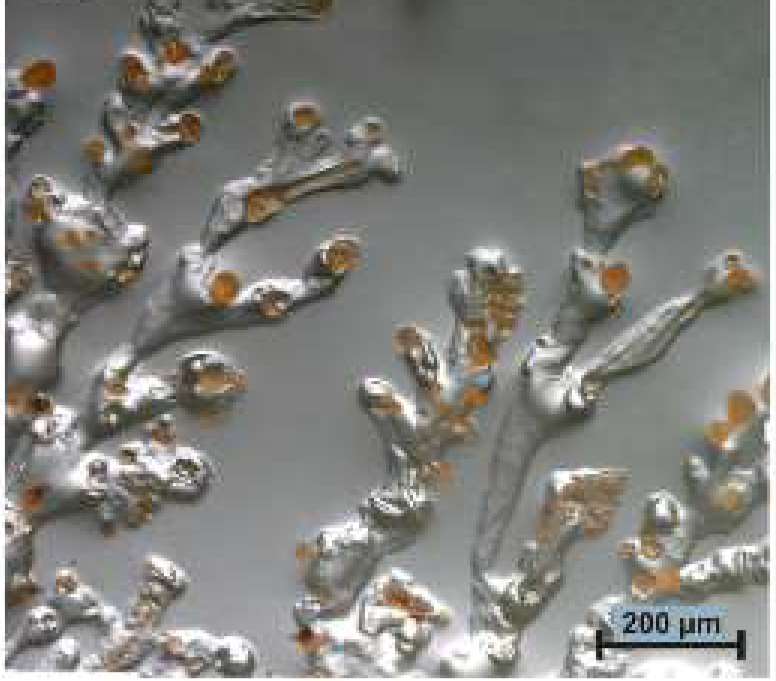 The vegetative cells of Polyangiun vitellinum are columnar with obtuse ends, 0.9—1.2×4—10 μm in size. The sporangia are golden yellow, reddish-yellow or brown-orange, and the shape is oval, spherical or cushion-like; the sporangia wall is obvious, and appear to have rods inside. Sporangia singly or in clusters, up to 20. When fresh, there is a white mucous membrane on the outside. Inclusions are initially flesh-colored, and then gradually turn into an oily yellow substance. In young sporangia, myxospores are similar to vegetative cells, 0.9 × 3-5 microns in size, and often stick together in bundles. In older sporangia, irregularly retracted rod-shaped myxospores are common, and in some cases appear to be cellless. Colonies are white or light pink when they form fruiting bodies and have a creamy texture.

The size of the vegetative cells of Polyangium luteum is 0.8 × 6.0 to 7.0 microns. The spore piles are golden yellow and contain spherical, oval or indeterminate sporangia of different sizes. The sporangia are 37-115×39-90 microns in size, with colorless thin walls. The common mucosal coating surrounding the sporangia was bright yellow, with a double-layered outer lining, up to 10 μm thick.

Myxospore size is 0.7-0.8 × 3.8-5.8 microns. Vegetative colonies are colorless to pale yellow with unclear outlines and can penetrate agar.

The vegetative cells of Polyangium fumosum are 0.7—1.0×5.0—7.0 microns. Spore mounds are usually flat, round or irregular in outline; containing 2-50 or more sporangia, initially pale pink, later becoming brown or smoky gray pigment, showing the outline of the sporangia. The walls of the sporangia are obvious, usually colorless double layers, slightly long to almost spherical, 17-72 × 13-60 microns (average 45 × 35 microns), and dark black pigments are present in a common mucus envelope.

Myxospores are 0.7-0.8×2.5-5.0 microns, with prominent terminal granules. In old sporangia, the contents of the sporangium may be transformed into a cell-free oily liquid due to bacteriolysis. The vegetative colonies are light pink, thin, and slowly become movable lumps (200-500 microns), which leave radial "ditches" and "canals" on the agar due to the movement. A pure culture of this bacterium grew slowly on yeast-Ca2+ agar and on a streak of Micrococcus aureus on the surface of water agar.

The vegetative cells of Polyangium cellulosum are rod-shaped and the size is 0.8-1.2×3.0-10 microns.

The sporangia are 20 to 30 microns in diameter and are round or polygonal in shape due to pressure from the mass. Four to several hundred sporangia (usually a few dozen) accumulate into a spore pile, which may or may not be covered by a visible mucus coating. When the spore mound is formed without any restraint, the mound is slightly tuberous and round cushion; when it is formed in the cellulose filament, it is a simple row of sporangia. Its color varies from light yellow, through shades of pink, orange, rust red and brown to gray and black.

Myxospores are similar to vegetative cells, 1.0--3.0 microns long. The bacteria can grow slowly on the filter paper covered with inorganic salt medium, and the growth material appears in 3-14 days. The colony edge is slightly yellow, pink or orange halo color. When the spore mounds are formed (within 2-4 weeks), the central part becomes a darker color.

The culture of Polyangium requires specific formulations of growth media for use in cloning, plasmid DNA preparation, and protein expression. Creative Biogene offers a selection of bacterial growth media and custom services for your specific application. If you are interested in our microbial anaerobic and aerobic culture platform, please contact us for more details.