The cells of Hyphomicrobium are 0.5-1.0x1-3μm in size and are shaped as rods, ovals, ovals or beans with tapered ends.  Cells can form unipolar or bipolar filaments of varying lengths, measuring 0.3-0.4μm in diameter after staining. The hyphae are not separated, but can appear as true branches. Cells stained well with carbolic acid fuchsin, but only weakly stained with water-soluble aniline dyes. Hyphomicrobium can reproduce by budding at the tip of the mycelium, and its mature buds can move, break away, and often attach to surfaces or other cells to form clumps. The buds lose motility immediately after attachment.

During the cultivation of the bacteria on a liquid medium, the liquid medium was never cloudy; the growths appeared as surface films or rings, which fell to the bottom of the vessel in older cultures. On solid media, even after long-term culture, the colonies are small, granular shiny surfaces that can appear wrinkled, concentric rings, or reflect light. With the growth of bacterial age, the colonies turned from dirty white to light brown. 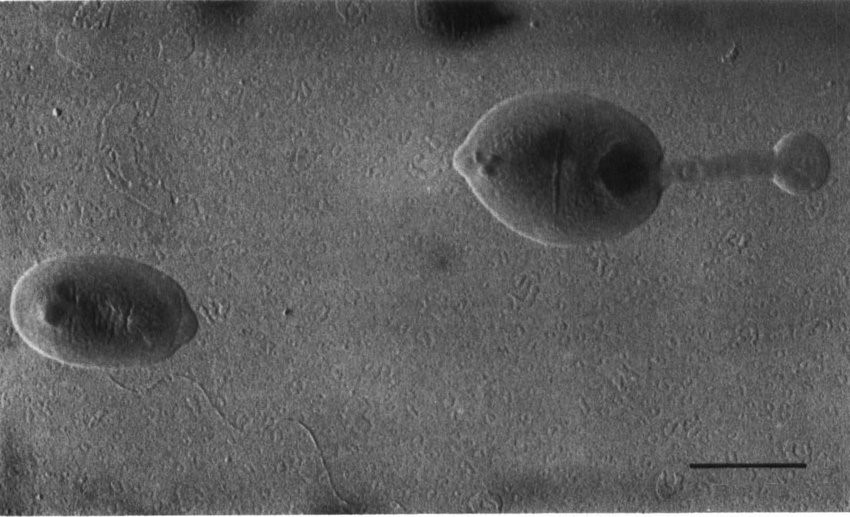 Hyphomicrobium belongs to the organic chemotrophic bacteria. CO2 is required for its growth. The carbon requirement is not high, and it can grow in the inorganic salt medium without carbon source. Humus or soil extracts can promote their growth if the pH is maintained near neutral. The bacteria grew well when incubated with 0.2% (w/v) formate, acetate, propionate, isobutyrate, valerate, lactate, succinate or mannitol. The bacteria grow slowly with 0.2% oxalate, glycerol or 1% Liebig's meat extract. Adding 0.5-1.0% beef extract and peptone to nutritional gelatin or pure gelatin does not grow. Studies have shown that the bacterium does not utilize fructose and sucrose, and fructose has an inhibitory effect on growth in the presence of KNO3. The bacteria grow well with NH4+, NO3 or NO2 as the N source. Furthermore, the bacteria grew in dilute urea solutions or asparagine solutions, but not on asparagine agar. Hyphomicrobium does not have the ability to oxidize ammonia to nitrate. Anaerobic growth occurs in the presence of nitrate, but accumulation of nitrite cannot be detected.

The bacteria are widely distributed in all terrestrial soils, especially those with nitrification potential.

Creative Biogene offers customizable Hyphomicrobium strain culture services. This service can help you obtain Hyphomicrobium cultures for subsequent scientific research. This service allows you to skip the complicated and tedious groping of culture conditions, which helps to speed up research on this strain.

The culture of Hyphomicrobium requires specific formulations of growth media for use in cloning, plasmid DNA preparation, and protein expression. Creative Biogene offers a selection of bacterial growth media and custom services for your specific application. If you are interested in our microbial anaerobic and aerobic culture platform, please contact us for more details.