Pelodictyon is an anaerobic bacterium. Photosynthesis occurs in the presence of hydrogen sulfide, during which they produce spherical elemental sulfur as an intermediate oxidation product that precipitates in the extracellular medium. Molecular hydrogen can act as an electron donor. Molecular oxygen is not released during photosynthesis. The cell suspension appears yellow-green in different shades due to photosynthetic pigments.

The single cells of Pelodictyon clathratiforme are rod-shaped, 0.7 to 1.2 microns wide, 1.5 to 2.5 microns long, and elongated cells can reach 7 microns. The three-dimensional network uniquely united by cells is formed by successive bidirectional divisions leading to the formation of cell chains. On such a chain, two neighboring cells occasionally change the way they grow. Neighboring bacilli begin to branch at the same time, thereby forming two Y-shaped cells in the center of the chain, juxtaposed at the ends of the two arms of Y. If such two cells are not separated, an enlarged ring structure will be formed between them, and then a typical multicellular network will be formed by continued elongation and bidirectional division. The arrangement of mesh-forming cells on the branched ends means that these cells all undergo three-way division to produce three daughter cells that are all attached at one end. So the colony structure of P. clathratiforme is formed by its ability to undergo two-way and three-way division. The color of the cell suspension of Pelodictyon clathratiforme is green. 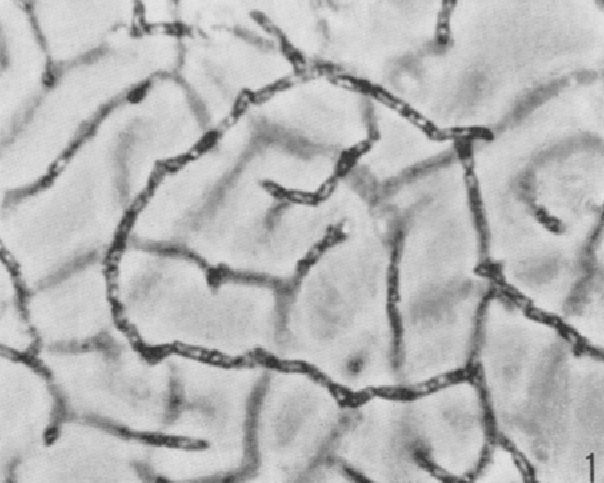 Pelodictyon clathratiforme is obligately photoautotrophic and strictly anaerobic. Optimum growth pH range: 6.5-7.0. Optimum growth temperature: 20°-25°C. The electron donors for photosynthesis are sulfide and sulfur. Acetate can be photosynthesized in the presence of sulfide and bicarbonate. The bacteria cannot use thiosulfate, higher fatty acids, pyruvate, succinate, protein, and cannot carry out the reduction of assimilative sulfuric acid.

The single cells of Pelodictyon luteolum are oval to short arc-shaped, and the cell size is 0.6-0.9×1.2-2.0μm, sometimes 1-1.5×2-4μm. In normal culture, bacteria can grow as free single cells. Under certain conditions, the cells produce mucus and coalesce into concave spheres or irregularly rounded colonies with a monolayer of cells. The latter mode of growth can occasionally be observed in mud samples or in enriched cultures. The color of the cell suspension is green.

The culture of Pelodictyon requires specific formulations of growth media for use in cloning, plasmid DNA preparation, and protein expression. Creative Biogene offers a selection of bacterial growth media and custom services for your specific application. If you are interested in our microbial anaerobic and aerobic culture platform, please contact us for more details.