Saprospira cells are unbranched and sheathless helical filaments, 0.8-1.5x10-500 microns in size. Saprospira cells move in a sliding fashion. The dormancy stage is unknown. Gram staining for Saprospira was negative.

Extensive studies have not been carried out with the exception of S. albida. The other three species can use tryptone as the sole nitrogen source but not glutamate and nitrate. In addition, the bacteria can liquefy gelatin without producing indole and ammonia, without reducing nitrate to nitrite, and without producing contact enzymes. Cell populations are colored, presumably due to the presence of carotenoid pigments.

The cells of Saprospira grandis are 0.8x1-2.5 μm in size with flexible helical filaments. The helix is ​​500 microns long, its width is 1.5 microns, and the pitch is 4-9 microns. The direction of the spiral is right-handed. Acetate, galactose, glucose and/or sucrose can promote the growth of certain strains. Lactate and glycerol do not promote growth. 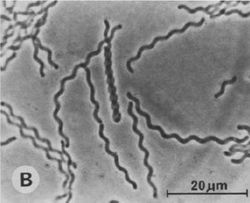 Saprospira grandis can coagulate litmus milk without producing acid. The bacteria generally do not digest curds and do not reduce litmus. Bacteria can degrade tyrosine crystal suspensions and form a pigmented product. Dihydroxyphenylalanine has an inhibitory effect on bacterial growth.

The bacteria cannot produce hydrogen sulfide from cysteine-containing media. During the growth process, there is no need to add vitamins. Among them, arginine, asparagine, histidine, isoleucine, lysine, methionine, proline, tryptophan, tyrosine and valine are indispensable for growth, and some undetermined components of the alkaline hydrolyzate of yeast's nucleic acids are also necessary for growth. The bacterial cell population was orange, and the hexane extract had the highest light absorption at 471 microns, due to the presence of an intracellular carotenoid. The optimum growth temperature is about 30°-37°C. The optimum pH is about 7. Although some strains can grow in media made from fresh water, most strains require seawater. Seawater resistance ranges from one-half to twice the ionic strength.

The cells of Saprospira thermali are 1.0x2-5 microns in size and are flexible helical filaments up to 150 microns long. The spiral width is 1.5-2.5 microns, and the pitch is 7-17 microns. Arabinose, fructose, mannose, rhamnose, ribose, trehalose, xylose and ethanol are not suitable for carbon and energy sources. The bacteria do not degrade tyrosine or dihydroxyphenylalanine in a clear suspension, but can produce hydrogen sulfide in a medium containing cysteine.

Saprospira thermali requires cobaltine, thiamine isoleucine, leucine and valine for growth. The cell population is pink; the hexane extract has the highest light absorption at 478 nm due to the presence of a carotenoid pigment. The optimum temperature is around 35°C. The optimum pH is about 7.

Arginine, glutamine, histidine, isoleucine, leucine, lysine, proline, tryptophan, and valine are necessary for growth and do not require other growth hormones. The cell population is orange-yellow; the hexane extract has the highest light absorption at 471 microns. A carotenoid pigment similar to humaxanthin is the primary pigment. The optimum temperature is about 25°C. The optimum pH is about 9. Growth requires one normality to twice the ionic strength of seawater.

The culture of Saprospira requires specific formulations of growth media for use in cloning, plasmid DNA preparation, and protein expression. Creative Biogene offers a selection of bacterial growth media and custom services for your specific application. If you are interested in our microbial anaerobic and aerobic culture platform, please contact us for more details.