The genus Rhodopseudomonas is a rod-shaped and ovate-to-spherical bacteria that proliferate in bipartite or asymmetric division. This bacterium moves with polar flagella and is a gram-negative bacterium. It contains chlorophyll a or b and carotenoids. These two kinds of pigments are located on the inner membrane system of sac-tubular and lamellar. 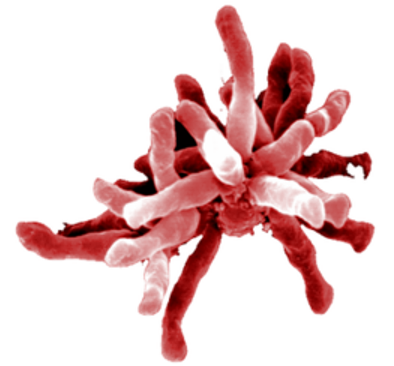 The young individual cells of Rhodopseudomonas palustris are rod-shaped to ovoid, occasionally slightly curved. The bacteria are 0.6-0.9 microns wide and 1.2-2.0 microns long, and move with polar or subpolar flagella. R. palustris multiplies by budding. Fascicle is the characteristics of long-term cultures of this fungus. Each bacteria in clusters is connected to each other with flagella. In some complex organic media, individual cells can be as long as 10 microns, have irregular shapes, and can also form branches. In the system of photosynthetic membranes, the parallel lamellae are below and connected to the cell plasma membrane; there is no lamellae structure in the tube.

The morphology, size and microstructure of R. viridis are the same as R. palustris.

The cells are rod-shaped to slightly curved oval. 1.0-1.3×2.0-5.0 microns, the daughter cells originated from the sessile buds growing on the opposite end of the flagella; there are no tubes or filaments between the daughter cells and the mother cells. When the bud grows to the same size as the mother cell, the cell divides in a constricted manner. Under certain conditions, cells can form clusters as mentioned in the description of R. palustris. In a medium that lacking calcium ions, the cells are immobile. The parallel lamella structure of intimal system of photosynthesis is under the cell membrane and connected to it. The lamellar membrane system of daughter cells is formed in the growing buds.

The cells are rod-shaped, straight or slightly curved. 0.4-0.5×1-2 microns, it can grow to 15 microns in a long-term culture, and it is irregularly curved. The bacteria reproduces in a bipartite division. Many strains can produce abundant mucus on all media, which makes the cells clumped. In young cultures or when a small amount of mucus is produced, cells move with extremely flagella. The internal photosynthetic membrane system consists of a small number of tubular or finger-like inner pleated plasma membranes.

The cells are spherical with a diameter of 0.7-4 microns. In a sugar-containing medium, the cells are oval, 2-2.5×2.5-3.5 microns. Young cultures use extreme flagella to move; in an alkaline medium, the movement stops and produces abundant mucus. The bacteria reproduces in a bipartite division. The photosynthetic intimal system is cystic.

The culture of Rhodopseudomonas requires specific formulations of growth media for use in cloning, plasmid DNA preparation, and protein expression. Creative Biogene offers a selection of bacterial growth media and custom services for your specific application. If you are interested in our microbial anaerobic and aerobic culture platform, please contact us for more details.