Actinomycetes are a class of terrestrial prokaryotes with strong mycelium growth and spore reproduction. Named for its radial growth on solid medium. Most have well-developed branching hyphae. The hyphae are slender and the width is close to that of rod-shaped bacteria, about 0.5 to 1 micron. Mycelium can be divided into: vegetative hyphae, also known as matrix hyphae, the main function is to absorb nutrients, some can produce different pigments, which is an important basis for bacterial identification; aerial hyphae, superimposed on vegetative hyphae, also known as secondary hyphae. 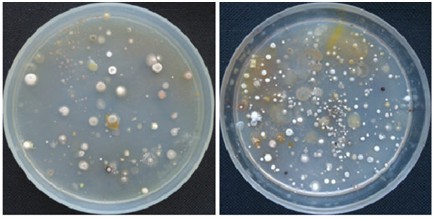 Actinomycetes are Gram-positive, high (G + C) mol% (>55%) bacteria. It is a prokaryotic group, widely distributed in nature, mainly reproduce by spores, followed by fission reproduction. Like general bacteria, most of them are saprophytic, and a few are parasitic.

Actinomycetes are closely related to human production and life, and about 70% of widely used antibiotics are produced by various Actinomycetes. Some species of Actinomycetes can also produce various enzyme preparations (protease, amylase, and cellulase, etc.), vitamins (B12) and organic acids. In addition, Actinomycetes can also be used in steroid transformation, hydrocarbon fermentation, petroleum dewaxing and sewage treatment. A few Actinomycetes also pose a hazard to humans, causing human and animal and plant diseases.

Actinomycetes are widely distributed in nature and mainly exist in soil, air and water in the form of spores or hyphae, especially in the soil with low water content, rich organic matter, neutral or slightly alkaline soil. Actinomycetes are only classified according to their morphology and belong to the actinobacteria. The unique muddy smell of soil is mainly caused by the metabolites of Actinomycetes.

Root endosymbiosis is a common type of interaction between plants and microorganisms. This effect has made a prominent contribution to the development of host plants. Endophytes refer to healthy plant tissue cells or intercellular life without causing disease symptoms of microorganisms, including bacteria, fungi and Actinomycetes, mainly Actinomycetes. A variety of plants can still grow normally in nitrogen-deficient soils. This is due to the nitrogen-fixing effect of endosymbiotic bacteria in the roots. After the bacteria infect plants, they use the nitrogenase they produce to convert atmospheric nitrogen into ammonia for plant growth. The normal growth of plants has played a great role in promoting. In addition, plant endophytes can secrete metabolites such as antibiotics, induce systemic resistance in plants, and enhance the antibacterial, insect resistance and stress resistance of plants. According to the existing research, most of the endophytic Actinomycetes belong to the genus Streptomyces.

In terms of plant disease and insect pest control, Actinomycetes can be parasitized in the plant tissue through antibacterial, competitive, predation and parasitism outside the host, inducing its resistance or bacteriostatic substances to affect the reproduction and growth of pathogenic bacteria. Thereby preventing pests and diseases. The live cell preparation made of Actinomycetes has the advantages of non-toxicity, no residue, no harm to non-target microorganisms, good environmental compatibility, and long-lasting effect of disease prevention. Mainly used is Streptomyces and its related groups. Mycostop is a live inoculum of Actinomycetes that is widely used in the world. It is mainly used to treat crops through seed treatment, soil spraying and other measures, so that the preparation can colonize the roots of plants. In order to prevent the infection of pathogenic bacteria, it is used to control some common diseases caused by Pythium, Fusarium, Phytophthora and Rhizoctonia.

There are many kinds of secondary metabolites of Actinomycetes, accounting for about 50% of the biologically active substances of microbial origin, which can be divided into β-lactams, polypeptides, glycopeptides, nucleosides and polyketones in terms of chemical structure. It has antibacterial, antitumor, immunosuppressive and activation, insecticidal and other activities, and is widely used in many fields, among which antibiotics are used more. Among the potential sources of natural products, microorganisms have proved to be a particularly favorable resource. Most of the compounds found only occupy a small part. Actinomycetes have produced more than 13,700 metabolites, mainly including enzymes, antibiotics, amino acids, vitamins, organic acids, alkaloids, etc., accounted for more than 40% of the natural active substances found, while Streptomyces alone accounted for 80% of the natural metabolites of Actinomycetes reported so far. Two-thirds of the more than 150 kinds of antibiotics currently used in clinical and agricultural use are from Actinomycetes, which shows the huge variety and quantity of secondary metabolites of Actinomycetes.

Creative Biogene provides customizable actinomycete strain culture services and corresponding metabolite large-scale production. This service can help you obtain Actinomycetes cultures for subsequent scientific research and industrial production. This service allows you to skip the complicated and tedious groping of culture conditions, which helps to speed up research on this strain.

Creative Biogene's fermentation platform has Good Manufacturing Practices (GMP) and can provide customers with a wide range of high-quality microbial fermentation products such as active pharmaceutical ingredients, enzymes and various fine chemicals. In addition, our microbiology experts have completed the transformation and innovation of traditional processes through continuous breakthroughs in key technologies of microbial fermentation processes, and fully contributed to the smooth delivery of the project.

Creative Biogene builds a world-class microbial fermentation technology platform, providing a variety of services from strain screening and optimization to fermentation production and product purification. We have many years of rich experience and provide good technical support for microbial GMP production.

As a leader in microbial production, Creative Biogene has comprehensive production process technology and high-volume manufacturing capabilities. Our goal is to help our customers develop streamlined and controlled manufacturing processes and to support customers throughout the entire product development process, from the R&D stage to market launch.

The culture of Actinomycetes requires specific formulations of growth media for use in cloning, plasmid DNA preparation, and protein expression. Creative Biogene offers a selection of bacterial growth media and custom services for your specific application. If you are interested in our microbial anaerobic and aerobic culture platform, please contact us for more details.