The vegetative cells of Chondromyces are cylindrical bacilli with blunt ends but not pointed. Sporangia solitary or clustered on simple or branched sporangia. Myxospores have no capsule, similar to vegetative cells. 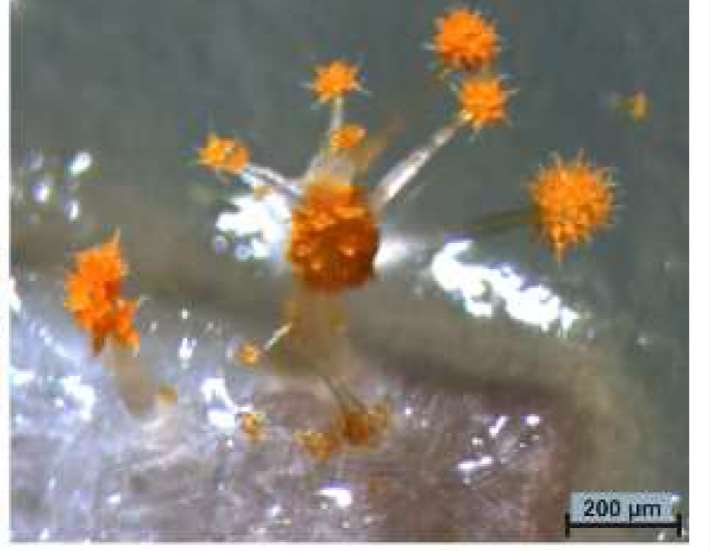 Chondromyces are aerobic bacteria. The growth temperature range is: 18°-37°C, and the optimum temperature is 28°-30°C.

The size of the vegetative cells of Chondromyces crocatus is 1.1-1.4 x 3-12 microns.

The sporangia are broadly fusiform, conical or subspherical, 10-25×15-30 microns in size. The sporangia are yellow at first, and finally turn golden or orange. The sporangia are up to 700 microns or longer, and the sporangia are clustered on the branched sporangia in spherical clusters. The sporangia are orange to brown, striped on the surface, often spirally coiled, and have several hollow channels containing few cells. In culture, some types with irregular branching and few sporangia, or some terminal fruiting body structures produced from the original position of sporangia germination can be observed. Myxospores are uncapsulated, and are indistinguishable from vegetative cells except for having distinct granules at one or both ends, measuring 1.0-1.3 x 3-6 microns in size.

On most media, vegetative colonies start out translucent, almost colorless, then turn yellow-orange and accumulate around the perimeter to form a "front". This phenomenon is particularly pronounced when in contact with other live bacterial colonies. The cylinders of vegetative cells can dent, corrode or penetrate the underlying agar.

Growth is poor on E. coli agar, and lysis is generally limited to areas in direct contact with the colony. Bacteriolysis of living cells requires direct contact. Pure cultures are grown on complex medium containing enzymatically hydrolyzed proteins and Mg2+. During the cultivation process, bacterial cell extracts need to be added to stimulate growth. The bacteria cannot reduce nitrate, nor produce oxidase and contact enzyme. During the cultivation process, the bacteria did not hydrolyze starch, Tween 80, respirol acetate, RNA, DNA, gelatin, urea, esculin, cellulose and casein.

The vegetative cells of Chondromyces apiculatus are rod-shaped and 1.1-1.4×3-14 microns in size.

The sporangia are straw yellow to bright orange and brownish orange. Among them, the sporangia vary in size and shape, ranging from cylindrical to broad turnip-shaped, with a size of 25-40 × 35-50μm, colorless in color, pointed ends, often branched, and terminal appendages up to 35 microns long. The sporangia are sessile or colorless stalks 30μm long. The sporangia are clustered in globular clusters, although usually in fewer numbers than Chondromyces crocatus, each globular cluster consists of approximately 60 or more sporangia. The stalk is rarely branched, up to 700μm in diameter, 15-40μm in diameter, with longitudinally striated hollow tubes, and acellular inside. A common sessile type, the sporangium is conjoined at the base, or has a large, irregular solitary sporangium. As with Chondromyces crocatus, secondary fruiting bodies, or sporangia formed at the tips of the appendages, were also observed. Myxospores are similar to vegetative cells, with a size of 1.0-1.3×3-6 microns. All other characteristics are similar to Chondromyces crocatus.

The sporangia are pale yellow to orange, orange-red when dry, subglobose to long cylindrical, rod-shaped or pear-shaped, usually broad, with truncated ends, rough surface, 25-40 × 35-60 μm in size. The sporangia are found in groups, up to 60, in the shape of an umbel on a thin 20-40 μm stalk. The stalk is unbranched, up to 750 µm, striate, sometimes curled, initially colourless, turning orange to brown when dry.

Chondromyces pediculatus can be grown on fecal agar and live bacteria. Only one pure culture was obtained on Casitone-Mg2+ agar of enriched with E. coli extract. The bacteria do not produce urease.

The culture of Chondromyces requires specific formulations of growth media for use in cloning, plasmid DNA preparation, and protein expression. Creative Biogene offers a selection of bacterial growth media and custom services for your specific application. If you are interested in our microbial anaerobic and aerobic culture platform, please contact us for more details.