The fast development of genome sequencing technologies and the power of advanced computational analyses of the DNA sequences dramatically increased the potential for natural product discovery. Our knowledge on the biosynthesis of secondary metabolites by bacteria is constantly expanding, thereby adding new information that connects biosynthetic genes with metabolites of particular chemical classes. With the cost-effective and rapid increase in the number of bacterial genomes sequenced, one challenge encountered in current drug discovery efforts is how to effectively prioritize those strains with the greatest ability to produce new compounds and understand the extent of biosynthetic potential that exists in nature.

(i) phenotype of the producer (e.g. bioactivity and biosynthesis of specific compounds or enzymes);
(ii) targeted chemical class of natural products (e.g. terpenes, lasso peptides and aromatic polyketides);
(iii) the potential uniqueness of the bacterial isolate that may yield novel compounds (e.g. novel or taxonomically divergent species, and isolates from unique environmental sources). 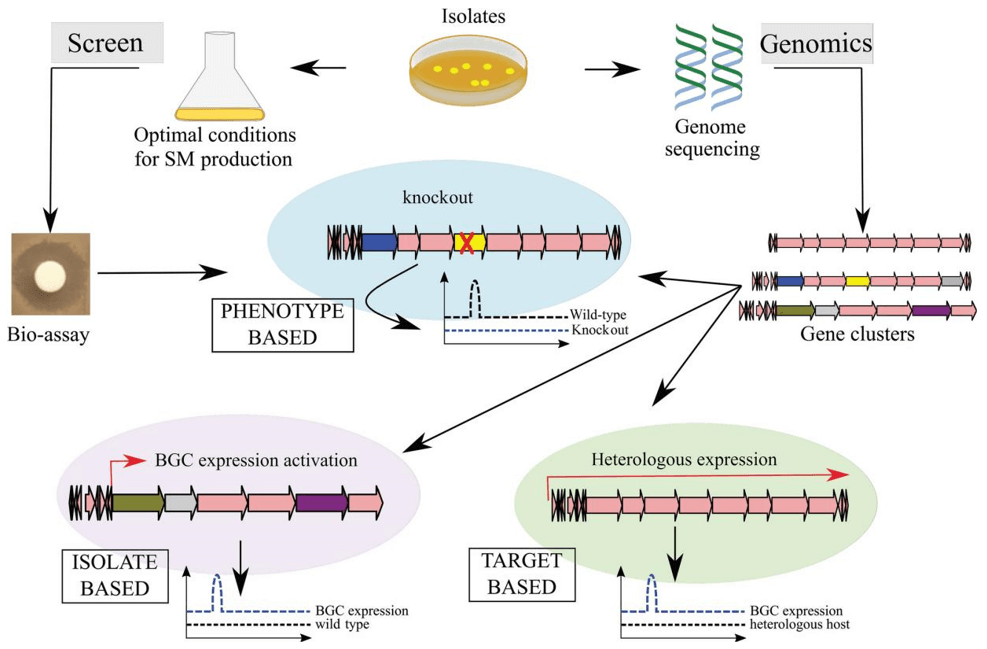 Several tools for the prediction of secondary metabolite genes are available, some of which are based on the detection of signature genes, while others are searching for specific patterns in gene content or regulation. Here are several bioinformatics tools to predict the correlation between gene and cognate compounds:

Genome mining of closely related taxa can greatly facilitate the discovery of novel pharmaceuticals and untapped sources of therapeutic agents. It highlights the importance of strain-level drug discovery approaches, exploring multiple genomes of closely related strains, rather than focusing on one strain representative of the entire species.

A starting point for application of target-based genome mining is the choice of a specific chemical class of a natural product, followed by mining of genomic DNA sequence for genes encoding products that specify biosynthesis of the corresponding molecular scaffold. Once the candidate targets are detected, different techniques (e.g. NMR, GC-MS, LC-MS) can be used to identify the secondary metabolite it specifies and to increase its production to a level allowing purification and biological testing. The expression of the candidate targets could be activated or enhanced in the host organism by genetic manipulation (e.g. CRISPR/Cas9 system) and/or by optimization of the growth conditions. Alternatively, it can be cloned and heterologously expressed in a well-characterized or engineered host. The goals of genomes mining services based on phenotype and uniqueness of the bacterial isolate are to produce new metabolites for drug discovery.